Calgary thrashers ILLYRIAN will be hitting the road for May tour dates in Alberta and British Columbia (dates listed below).  The tour is in support of their latest album ‘Round 2: Fight!’ unleashed during October of last year. The album was co-produced by the band with Casey Lewis at Echo Base Studios plus mastered by Sacha Laskow (Every Hour Kills, ex-Divinity) at Perfect Fifth Studios.

Formed in 2011 under the name Hellborn Death Engines, the band resurfaced under the new moniker ILLYRIAN with the additions of bassist / vocalist Jeff Perry (Sikarra, ex-Animus Labyrinth) plus British drum sensation Darren May (ex-Deacon Birch) who have brought new and progressive musical mindsets into the band to join original and founding members Scott Onofrychuk (guitars/vocals) and Brandon McNeil (guitar/vocals).

Full album stream can be heard at the following link: http://illyrian.bandcamp.com/album/round-2-fight plus available for on iTunes, Amazon. 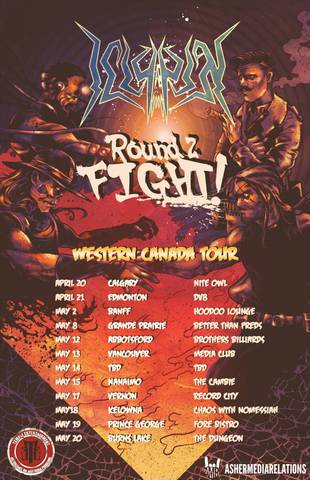