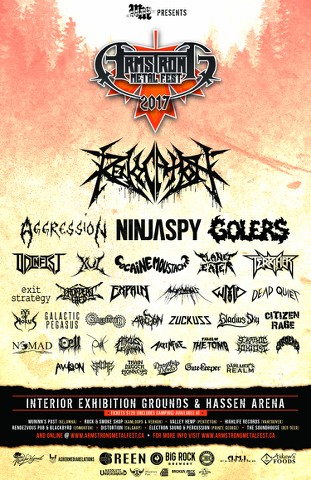 Promo Video – https://www.youtube.com/watch?v=O9zHeA2pKWs
2016 AMF Free Digital Sampler – https://armstrongmetalfest.bandcamp.com/album/armstrong-metalfest-2016-mountain-moshpit-vol-1
(over 90 minutes of headbanging tracks from bands on the 2016 line up)
Nestled in the Okanagan valley, the town of Armstrong has become British Columbia’s largest mosh pit. Trembling the Rocky Mountains and creating a gathering of metalheads like no other in Western Canada, ARMSTRONG METALFEST, now in its ninth year returns with a 2017 line up that metal fans from across country will feast on from sunrise till way past sunset on July 14th and 15th at the Hassen Arena.
This year’s headliners include Boston’s tech death / thrash titans REVOCATION, Vancouver’s ska-metal champions NINJASPY, Canadian 80’s thrash legends AGGRESSION and the Broken Neck Radio peoples choice winner GOLERS among many more from across the country. (full list below)

Confirmed for the fest is the following line-up:
(day line-ups and set times will be revealed at a later date)