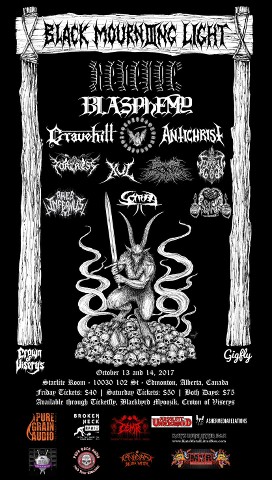 Born out the hell storm of Edmonton, AB, black and doom metal festival Black Mourning Light presented by Crown of Viserys and GigFly.ca unleash the most brutal line up to date for the 2017 edition hosted on October 13th and 14th at the Starlite Room.

“This year we are taking extreme to a new level for Black Mourning Light, and I couldn’t be more honoured to have true legends in black metal on the festival. Revenge and Blasphemy are two of the biggest names in black metal, and with them are some of the best bands in the world to create an absolutely killer lineup. This is a year to not be missed, that’s for sure.”

Tickets will be on sale at Starliteroom and online at the following links: