For fans of Gojira, Sikth, Mehsuggah, Dillinger Escape Plan, Between The Buried And Me 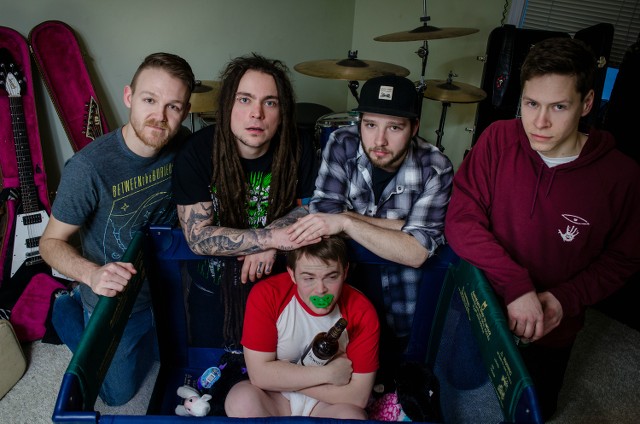 Isolation has most certainly bred inspiration in the shape of SLAGDUSTER. Hailing from Grand Forks, B.C, the band is name after a slang term local to their area for a piece of machinery that was used in the mines over a hundred years ago.

“We are the only four musicians in our small town driven to form a progressive metal band.” says vocalist Shane Sherman.

Inspired by such giants as Goijira. Sikth, Meshuggah, Dillinger Escape Plan, Between The Buried And Me,SLAGDUSTER offer a progressive, groovy, creative, unique and heavy sound.

It’s been a few years since their debut album ‘Nature.Humanity.Machine’ and SLAGDUSTER is ready to unleash their follow up ‘Deadweight’ due out on May 5th, 2017.

“Naturally our sound has come a long way since our debut release in 2010. The music is more complex, and much more developed, still heavy, but even more groove based. Listeners can expect to be challenged by focusing on the compositions, or lost in the musical landscape.” says vocalist Shane Sherman.

Having released their first single ‘Peeping Ron’ a few weeks ago (listen here), the band is ready to share with fans their next track ‘Mother’s Milk’ premiered exclusively on NoCleanSinging.com.

“”Mother’s Milk” is one of the more structured arrangements on the new album. We like some of the riffs so much that we couldn’t avoid bringing them back a couple times. It starts off with a strong driving march feel, before picking up speed and racing around hairpin corners, drifting effortlessly while navigating multiple sonic terrains smoothly from start to finish. Lyrically, the message focuses on a downward spiral of dependence and desperation, characterized within a story about an unhealthy mother/son relationship, a dark contrast to the song’s upbeat tempo.”

Listen to ‘Mother’s Milk’ by visiting the following link: http://www.nocleansinging.com/2017/03/28/an-ncs-premiere-slagduster-mothers-milk/

Like the ancient machine they are named after, SLAGDUSTER work hard to draw art from base material, they’re sound is meticulous and lengthy. All nine of tracks on ‘Deadweight’ have been very slowly and carefully crafted over the years. No songs were scrapped; all were completely revamped continuously for years. SLAGDUSTER put way more effort into collaborative song writing, which has significantly advanced their original sound. Each track contains a variety of things, ranging from ripping riffs and tremolo melodies to soft transitional parts and psychedelic interludes on top of constant heaviness and groove.

Of course, these songs are transformed in SLAGDUSTER’s live show, which vocalist Shane Sherman describes as “high energy, bordering on ridiculous, with offensive banter and annoying antics from an attention hungry front man. Well executed yet fun and light-hearted performances perfected over years of touring.”