Influenced by legends such as Iron Maiden, Megadeth, Accept and Metal Church, Chilliwack, BC heavy metallers MEDEVIL are set to unleash their debut full length ‘Conductor of Storms’ on August 26th. The Canadian metal scene has been anticipating this release since the band placed in the top 6 during the 2015 Wacken Metal Battle Canada competition where they won over many fans with their self described ‘power thrash’ full of blistering fast riffs, strong choruses and front man Liam Collingwood’s impressive vocals (you can swear is Udo Dirkschneider from a distance).

Teaming up with Bravewords, MEDEVIL premiere their video for ‘Nightwalk’ at the following link: http://bravewords.com/exclusives/videos/medevil-unleash-nightwalk-video 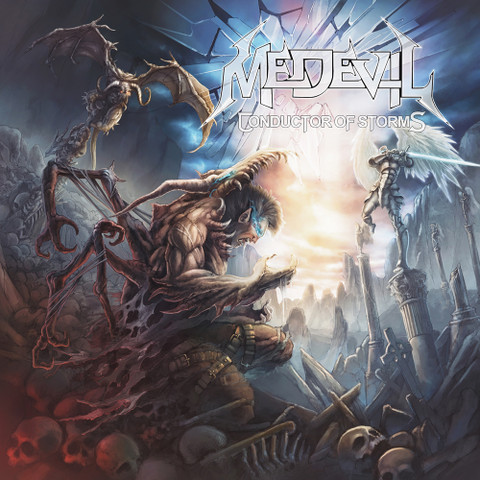 MEDEVIL will also will be hitting the road this coming August and September for their Western Canadian tour presented by PureGrainAudio.com. It is one of the most magical moments in a band’s life when they release their debut album. We can only imagine what Kerry King and Tom Araya felt like on the eve of ‘Show No Mercy’ being unleashed on the world, or the excitement that must have coursed through Steve Harris and Dave Murray as their self-titled debut was about to escape into an unsuspecting and never to be the same again world.

Well, Medevil don’t just imagine it…their debut album ‘Conductor of Storms’ is about to explode in a blast of metallic thunder and lightning upon the earth.

Hailing from Chiliwack, BC, Medevil are a hard-working progressive band, constantly striving to improve their songs, a fact not missed by Wacken Metal Battle Canada, where Medevil made the top 6!

Band vocalist Liam Collingwood explains the band’s memorable moniker. ‘The band name was thought up by Eric and fits our style of music perfectly.’

Liam is very serious about the bands modus operandi. ‘Medevil formed as a creative outlet for each member. The goal of our band is to satisfy our creative desires, while maintaining our standard of quality and to expand our knowledge of music as a whole. In five words, I’d sum up our music as power/thrash/prog/heavy metal.’

Liam says if he had to pick one Medevil track to represent the band it would be ‘the song ‘Machination Factory’ as it is one of the heavier songs on the album and it’s also the newest song that we wrote so it’s fresher in our heads. We wanted to release something first that would be a good start at representing our band even though future songs may.’

Liam reveals that song-writing is very much a collaborative effort. ‘We normally have a bunch of riff ideas ourselves and then we all come together to complete our vision…We all take part in the writing. All the songs have some sort of collaboration going on, even though some may be very minor alterations. We try to collaborate on projects as much as possible without destroying the original vision.’

While the band collaborates strongly on the music, the lyrics are Liam’s department, as you’d expect. ‘Lyrics are normally written based on an emotion or a story I am thinking of at the time that I want to project. Although sometimes I have some melodies in my head that I really like which I try to put into my lyrics. Some songs are more about a story I am telling whether fictional or somewhat true. Others are about a feeling or emotion I am feeling at the time and can be hidden beneath metaphors.’

Liam is proud that Medevil have a high level of quality control when it comes to their music. ‘In total we probably scrapped eight songs in favour of the ones included on the album. Our early sound, from 2011-2014, was mostly a rock-esque type of metal. ‘In The Distance’, ‘The Angel of Rain’ and ‘A Sacrifice’ are all from the early days of the band. When we included Brett and Gary in the band in 2014, we started leaning towards a much faster and more progressive style.’

A similar level of thought went into the track listing. ‘The track listing was a long task, it was most decided based on what we thought was the best listening experience for our fans and for how we like to set up our live shows with some changes. Fans can expect new material in the coming years and regular tours once or twice a year.’

Liam rates the bands live show highly. ‘People can expect a refined sound from us as well as a powerful energy, and a good connection between the band members. Fans can tell we are a band of friends!’

And now we can add Medevil to that proud list of bands beginning with M who all released powerful a debut album.