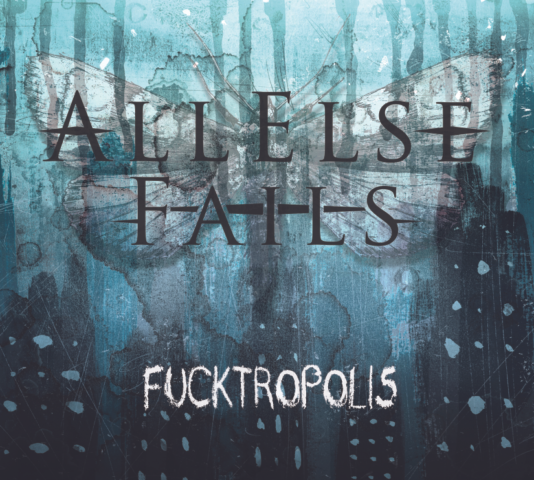 All Else Fails, the loud, heavy, lyrically conscious Canadian metal band who’s 2013 EP ‘Fucktropolis’ garnered them award wins at the 2014 Western Canadian Music Awards and Edmonton Music Awards are proud to close the chapter on the release with their final music video. Teaming up with MetalInjection.net, the band premiere their latest political message ‘AntiMartyr’.

“It’s been a long road since we released Fucktropolis almost 4 years ago, and since then we have been in almost constant member changeover hell. Some of it was good, like bringing back original drummer Ryan Biggs, but some, like losing our long time bassist Seedy Mitchell was much harder. We have a new bass player, the new album written and in pre production and it is sounding fresh and awesome, but it was important to us to release Antimartyr as a full single first. With that, it wouldn’t have felt right with Mitch’s voice coming out of the new guy’s mouth in the video, so we talked him into coming back for one last project, and I’m really happy with the turnout, it seems like a great way to send off an album that treated us so well, and move on to the next grand adventure. Hopefully one that won’t take us another 4 years to follow up.”

About: The fourth release since 2007, 2013’s award winning ‘Fucktropolis’ was the follow up to the band’s 2012 album ‘The Oracle, What Was, Is And Could Have Been’ that received world wide praise from industry publications around the world along with their music video ‘This Burden of Life‘ added to rotation on Canada’s largest music channel Much Music, expanding their Canadian fan base dramatically.

Making their mark around the world for their aggressively dark brand of metal that is breaking the traditional ideals of their genre and drawing comparisons to bands like As I Lay Dying, All That Remains, Killswitch Engage, Lamb of God. All Else Fails infuses their music with a variety of elements that includes experimental, classical, synth lines, and spoken word sampling to accent a unique blend of heavy as hell screams and shiver inducing clean vocals.