AND THE WORLD RECORD GOES TO… 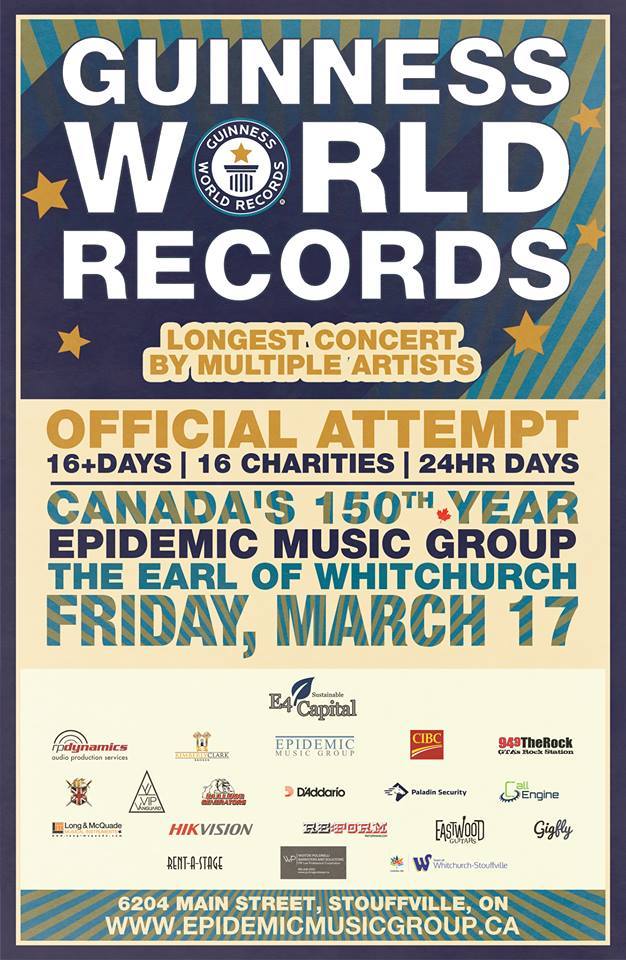 IN CANADA’S 150th YEAR – STOUFFVILLE, ON PLAYS HOST TO
THE OFFICIAL ATTEMPT AT WORLD RECORD FOR
LONGEST CONCERT BY MULTIPLE ARTISTS

EACH DAY TO SHOWCASE A DIFFERENT
CANADIAN CHARITY

Toronto, ON – February 15, 2017 – On March 17th, Canada will set out to attempt the Guinness World Record for the Longest Concert by Multiple Artists. Organized by Kevin Ker and Epidemic Music Group, and hosted at the Earl of Whitchurch in Stouffville, ON (40 minutes north of Toronto), the event will run for 16+ days, ‘round the clock. In Canada’s 150th year, we will take this record from the USA and show the nation that our community is strong, and our determination is immeasurable!

“Watching Gord Downie overcome unimaginable adversity last year, to tour and bring awareness to such important causes, is one of the most inspiring things I have ever witnessed,” comments Ker. “The obstacle we face pales in comparison, this Guinness Record attempt is our opportunity to make a difference.”

Organized by a massive group of industry leaders, passionate volunteers, sponsors, charities and music lovers, this event will be no easy undertaking. The Guinness guidelines for the attempt are strict and include rules such as: no more than five minutes between acts, no more than 30 seconds between songs, the same song must not be played more than once in a four-hour period, and a static video of the entire effort must be submitted. Over 100 volunteers and close to 400 bands and performers will be needed to pull off the landmark event.

For more information about the event, and how to get involved, please visit:www.facebook.com/GuinnessRecordAttemptByEpidemicMusicGroup
www.epidemicmusicgroup.ca

To be a volunteer at the event please contact:
Shaen Ar – shaenvolunteer@gmail.com