Calgary, AB progressive death metal band DIVINITY announces they will be embarking on a dual album release Alberta tour with Vancouver, BC’s EXPAIN. The tour will be in promotion ofDIVINITY recently released album “The Immortalist” along with EXPAIN supporting their forthcoming EP “Pinching Nerves”. The one week tour will be kicking off in Innisfail, AB on September 21st and wrap up in Banff, AB on September 26th (full dates listed below).

DIVINITY‘s “The Immortalist” is a culmination of 5 years of hard work and dedication to their craft.  The album features 12 tracks that include their two previous EP releases “The Immortalist, Pt. 1 – Awestruck” and “The Immortalist, Pt. 2 –Momentum” with their 3rd EP “The Immortalist Pt. 3 – Conqueror” now completed to finish off the trilogy series as one huge full length album. All the tracks on the album are re-mixed and re-mastered by the talented Chris Donaldson (Cryptopsy, The Grid Productions) to make the songs more cohesive and work as a full-length experience. This album also features Bjorn ‘Speed’ Strid of Soilwork on vocals for the song ‘D.M.T.’. 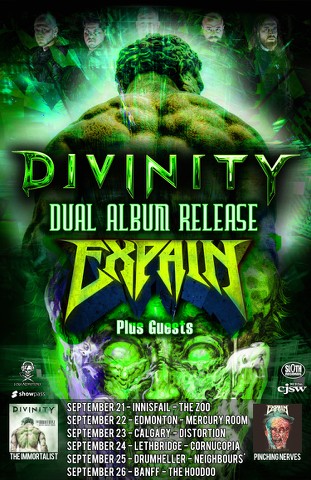