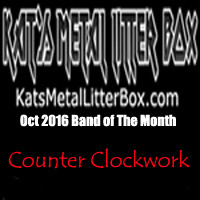 We are a 6 members band named COUNTER CLOCKWORK and play what we call Toasty Metal out of Moncton, NB. The band started in 2015 and has been working hard trough these last years by playing various shows in NB, NS, PEI, Quebec and Ontario as well as writing and producing a full-length album. We are a very energetic group mostly influenced by stoner rock and metal while giving it a little twist with 3 guitars that produce non-stop polyphonic arrangements. Not only are we here to have fun and enjoy these moments, we hope we can invite people to do the same! In other words, COUNTER CLOCKWORK brings a party to the party!