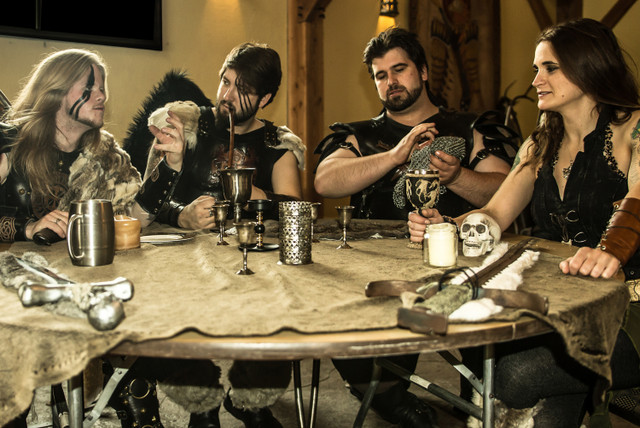 Canadian progressive/power folklore metallers SCYTHIA recently released their newest full-length offering, Lineage. You can order your digital or physical copy of Lineage now via the band’s Bandcamp page. These minstrels of metal are back today with a play-through video of the album’s title track, “Lineage”, which you can view now exclusively via Gear Gods: http://geargods.net/playthrough/scythia-shred-tastic-new-guitar-playthrough-for-lineage/
SCYTHIA guitarist and vocalist Dave Khan states, “We’re stoked to have our playthrough of “Lineage” up with Gear Gods! We use some really unusual gear. I play a custom-made Warrior Black Knight with X2N active pick-ups into an ENGL raider 1 x 12, and AJ plays a Ibanez RG premium through a Blackstar HT Stage 100.”
Although the band primarily self-produced the album, Lineage features engineering from Nino Laurenne (Firewind, Finntroll, Wintersun, Ensiferum) and Lasse Lammert (Alestorm, Gloryhammer, Powerwolf), and mastering from Svante Forsback (Rammstein, Volbeat, Firewind, Apocalyptica). Nino Laurenne is also responsible for mixing duties on the album. Lineage was recorded at LSD Studios in Lubeck, Germany and Sonic Pump Studios in Helsinki, Finland.
SCYTHIA are gearing up to perform at two more events this summer before heading out on a tour this fall (details coming soon). See below for all currently confirmed performance dates.Upcoming Dates: