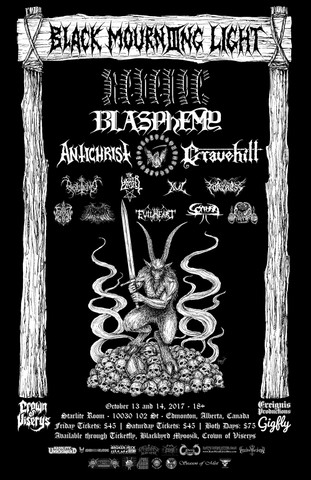 Born out the hell storm of Edmonton, AB, black and doom metal festival Black Mourning Light presented by Crown of Viserys and GigFly.ca returns for its third installment. They have taken the meaning of extreme to new levels with this year’s 2017 edition hosted on October 13th and 14th at the Starlite Room.

“This year we are taking Black Mourning Light to a new level of brutality, and I couldn’t be more honoured to have true legends in black metal on the festival. Revenge and Blasphemy are two of the biggest names in black metal and with them are some of the best bands in the world to create an absolutely killer lineup. This is a year to not be missed, that’s for sure.”

One of the first truly extreme metal bands, not only in Canada but around the world, BLASPHEMY invokes a large degree of respect. Founded back in 1984, the band is often cited as being a pioneer of the Death/Black ‘War Metal’ sound. After a demo and two very well received albums, the band had cemented their legacy very quickly. Their importance has been affirmed by the number of times those two legendary albums, ‘Fallen Angel Of Doom” and Gods Of War’ have been issued and reissued around the world. They set a standard that many still follow today.

One of the most prolific bands to ever come out of the Canadian Black Metal scene. With four full-length albums, two EP’s and multiple international tours and festival appearances behind them, Canada’s REVENGE have for over a decade cultivated what is arguably one of the most confrontational sounds in the metal underground. Keeping an extremely low profile as far as engaging the public with interviews and social media, Revenge has instead utilized the word of mouth approach to build a large die hard following worldwide that continues to grow every year based on the strength of the bands Music, lone wolf attitude and insanely chaotic live performances. (As those who witnessed their extremely well received appearance at this years Maryland Death Fest can attest to.) The bands appearance at Noctis Fest will mark their first appearance in western Canada and only their second Canadian show ever in the bands 13 year existence. Not to be missed, Revenge walk alone above the weak enemy scum with absolute disregard for all who question their approach of undying intolerance for the swine known as mankind.

Rites of Thy Degringolade

In the name of Rites, the Graciousless, the Merciless. Master of the Day of Judgement …Guide us in the Left Path!

The next generation of metal coming to knock your teeth in. Stay tuned for big things to come!

Better than being simply Lovecraft-inspired is to sound like something that’s shambled over from some unknown dimension, to sound like something that perhaps would’ve inspired Lovecraft. Sorguinazia are likely a little too intense for a man who died a decade before the birth of rock ‘n’ roll, but these Canadian self-proclaimed demons practice a style of black metal that sounds coaxed forth from a benighted lacuna between the strangest of planes.

Antichrist were a cult Canadian band that played bestial/war metal in the vein of genre innovators Blasphemy. Their lone release, a full-length entitled Sacrament of Blood was recorded in 1994, but wasn’t released until 2011 by NWN! Productions.

A five piece group based out of Vernon, British Columbia, Canada, following in the footsteps of bands such as: Behemoth, Dissection, and Immortal, XUL have left the beaten path and set out to forge their own brand of Blackened Death Metal.

Driven by determination and a diverse accumulation of musical comprehension, XUL has toured Western Canada, as well as proven themselves worthy to share the stage with bands such as: Obscura, Exhumed, Vreid, Kampfar, Woods of Ypres, Macabre, Withered, Cephalic Carnage, Archspire, Skeleton Witch, Beyond Creation, and 3 Inches of Blood. After XUL’s first cross Canada tour, and with a new album recorded, they have decided to take some time to think about what the future holds.

Funeral of God is a black metal band based out Canton, OH Founded by Demogorgon in February of 2014, It is dedicated to creating sonic terror for Lucifer.

We are a four-piece death metal band from Regina, SK. Formed in February 2014, and playing shows since June 2014, we have had a few lineup changes and our songwriting has evolved immensely. We are greatly influenced by old school death metal bands like Cannibal Corpse and Morbid Angel, as well as bands from every other spectrum of metal. We all have a love for atmospheric music and it is something we try to incorporate into our sound.